The Biotech Campus Delft has strong ambitions. “South Holland must maintain a strong economic position,” says location director Fedde Sonnema. “The Biotech Campus Delft is working on sustainable growth: in companies, turnover and employees. We need our partners for this, so we are happy to welcome them on site.” As well as the Economic Board South Holland, the boards of mayor and aldermen of Delft and Rijswijk visited the Campus this fall.

The South Holland economy is strong, but within the Netherlands it lags behind. The scarcity of space and staff are making themselves felt. The Economic Board South Holland (EBZ), consisting of important players from the business community, knowledge institutions and the government, is committed to a green and strong economy. “The province wants to remain a leader nationally and internationally, but in a sustainable way,” says Fedde Sonnema. “That fits in perfectly with the development of the Biotech Campus Delft. At the end of September, the EBZ was able to observe this with its own eyes.”

All sections of the EBZ were represented at the meeting. Sonnema himself gave an introduction, in which he talked about the merger of DSM and Firmenich and about the developments at the Biotech Campus Delft and at Planet B.io. “Delft is becoming increasingly important for DSM,” says Sonnema. “First of all because the head office of DSM Food & Beverage is now located in Delft, which means that we manage a business worth 1.5 billion euro from Delft. The merger with Firmenich doubles this amount again. Planet B.io, where young companies in industrial biotechnology are given opportunities, is also growing rapidly. This is how we are building a green future in Delft.”

The growth of the Biotech Campus Delft brings with it both opportunities and challenges. The boards of mayor and aldermen of Delft and Rijswijk learned more about this during a visit to the Campus and Planet B.io.  Program director Development Biotech Campus Delft Gerben Jacobs was one of the hosts. “In addition to DSM Food & Beverage and Planet B.io, we talked about our growth plans for the entire campus,” he says. That aroused enthusiasm, but also questions. “The question 'How do we keep the campus accessible?' came up in discussion,” says Jacobs. “Our growth ambition is a long-term ambition; for example, there will be no accessibility problems in the coming years. But changes to infrastructure have a long lead time. That is why it’s very good to think about this at an early stage.”

Another question concerned the layout of the Biotech Campus Delft. Jacobs: “To be honest, it is now mainly a location with a strong industrial appearance. But we are working on an urban plan and a landscape plan. Our buildings must meet the latest sustainability requirements. In addition, we are working on water storage, biodiversity, a bicycle-friendly location and lots of greenery on campus.” Finally, both boards were interested in the need for employees. Jacobs: “They wanted to know whether we are only going to grow with highly educated employees, or whether there is also a need for practically trained people. The latter is of course the case: there are opportunities at all levels and in various disciplines. Growth in Research & Development is only possible if there are also people for various facilities and production.”

All those people have to be trained somewhere, and Jacobs is therefore proud of the collaboration with TU Delft, Inholland University of Applied Sciences and hopefully the MBO. And those people have to live somewhere. “It is important for the boards to get a good prognosis, so that they can take this into account in area development. That makes such meetings very useful. We grow together!” 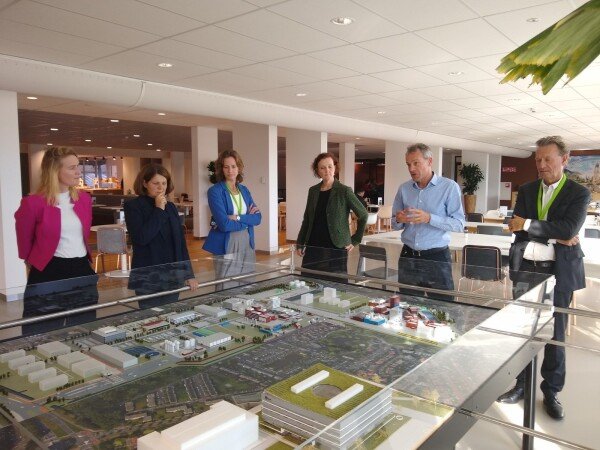